Some rather unusual research at Waterloo Station….

Our research for A First Class Death for VAULT Festival 2015 is taking us in so many unusual yet wonderful directions! Playwright Jason Hall spent a day shadowing a funeral director (more info to follow) while I explored the old Necropolis platform now turned fantastic Make Space Studios (you can see the studios as you come into Waterloo Station). See Make Space Studios for a fantastic YouTube video about the Necropolis Railway. Anna (Assistant Director) and I also had a brilliantly inspiring evening at a Death Cafe (www.deathcafe.com) enjoying tea, cake and talking about death with some lovely people. Though we’ll admit to being slightly apprehensive beforehand we had such a fun, joyful and inspirational evening. Meanwhile, our R&D workshops with a fantastic bunch of actors led to sharing stories of sadness as well as much heart warming laughter. 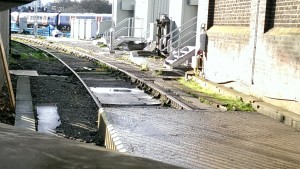 What sort of music would you like played at your funeral? We discussed Danny Boy, The Lord Is My Shepherd and Shania Twain. Yes, someone’s granddad was carried down the aisle to ‘That Don’t Impress Me Much’! Wonderful. And as well as bits of improv, storymaking exercises and attempting to physicalise the stages of death, we also took to the streets to try our hand at giving tours as our piece has a tour guide element to it. All great fun and thanks so much to everyone involved!

Really looking forward to sharing all our thoughts and findings about death, funerals and the Necropolis Railway with you in February 2015 at VAULT Festival.

Now back to reading ‘Death, Dying and Bereavement‘. Some light-hearted reading for a Christmas evening! 🙂