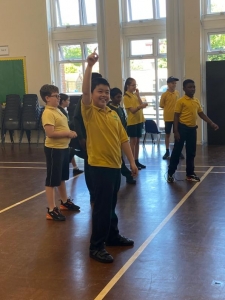 Possibly one of the most rewarding parts of these workshops is that our facilitators see the impact the experience can have on the students, and even see growth in the confidence and interest of individual children over the course of the session. For example, student ‘P’ started his session with his back to the facilitators. During the course of the workshop he became more interested, especially when Juliane compared music to his favourite subject, maths. By the end ‘P’ was fully involved, excited and he wanted to answer ALL the questions!

Student ‘S’ was described by teachers as a very disengaged student who regularly checks out of lessons and doesn’t speak much. However, much to her teacher’s surprise, ‘S’ was very engaged throughout the workshop. Her hand kept shooting up during discussions and she was very happy to share her knowledge on instruments of the orchestra. 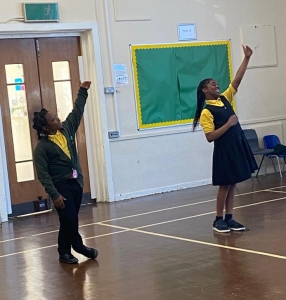 Student ‘A’ did not seem interested or confident at the start when he found out it was an opera workshop, but he loved the singing and acting and was very helpful in encouraging others to join in once he realised how much fun it was!

These workshops were organised with the help of the lovely teams at Merton Music Foundation and Wandsworth Music and were generously supported by Wimbledon Foundation, Wandsworth Council, Merton Council, Arts Council England and The Samuel Gardner Memorial Trust.

Gearing Up for Carehome Concerts

We are just one week away from our ...