“I’d date Guglielmo if he was filled with marshmallows…”

Wow, running opera workshops for young people can be such fun – and so rewarding! We’ve just run a series of workshops at Merton primary, secondary schools and the fantastic Jigsaw4u as part of our Cosi Fan Tutte Street Opera project, funded by Wimbledon Foundation and it’s really been fantastic. Many of these children would not otherwise have an opportunity to access this art form, and some may not have previously known what opera was, but after a session with us they were confidently singing a Mozart love duet and giving us their best confident cocky Guglielmos and flirty coy Dorabellas!

Y6 pupils entering into the music and spirit of Mozart and Cosi fan Tutte. Fantastic experience – thank you @BaselessFabric pic.twitter.com/G7sMlXlGhr

Fizz (Felicity Buckland), the professional opera singer who is playing Dorabella in our production, gave the children an insight into her opera singing and training. As well as teaching them to sing part of Cosi, she sang and got them thinking about bits of other operas they might have heard in tv adverts including a bit of Carmen in a recent Disney/Pixar film….any guesses which one? 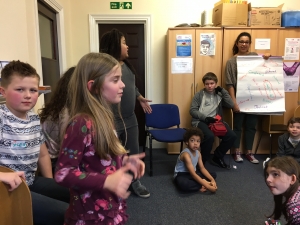 It’s funny how “a love story with a bit of meanness” (which is how one student described Cosi) can resonate with young people. It doesn’t matter that it was written in 1790, in Baseless Fabric’s re-imagining of the story for the modern world, the 8-14year olds we worked with, had pretty clear ideas about these characters and what they thought of the story. Very few of them thought the girls should get back together with their original boyfriends at the end of the opera, a few thought they should keep going out in their new couples, but most thought the girls should just dump them both! We also decided the confident flirty Guglielmo was a bit like Joey in Friends TV show. “How you doing?”….! My favourite comment was that one student would date Guglielmo, but only if he was filled with marshmallows… 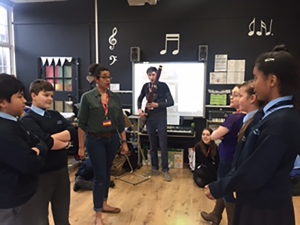 And although we had fun playing Zip Zap Boing and singing/dancing in Button Factory (though “this wasn’t in my contract” joked MD Leo as he flailed various limbs around and attempted to keep up), it was the children singing and acting a classic opera love duet that was truly spectacular – especially when in so many groups, several brave individuals got up to perform the scenes in front of the group. The biggest applause goes to an 8 year old boy, who at the beginning of the day did not even want to come into the room to be part of the workshop, but by the end of the day sang the Mozart love duet on his own in front of the group with our professional opera singer. Don’t tell me music and drama can’t change young people’s lives….

Have a look at what yr 6 kids had to say about their opera workshop run by @BaselessFabric https://t.co/IzJRb7g04z

We asked Francis, originally a musicals fan, to ...