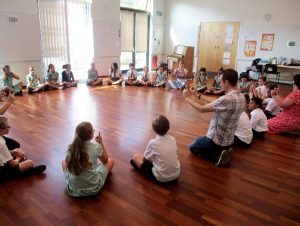 We asked our brilliant workshop leaders James, Elliott and Danae to tell us a bit more about how they went…..

What were the main parts of the workshop?

We each did a warm-up game – drama, rhythm and singing – and then discussed what opera is with the children and who is involved in putting on an opera, including the different sections of the orchestra. They also learnt about singing and acting and Danae sang different short sections from operas and we discussed how they thought her character was feeling based on her body language. Elliott explained the story of Die Fledermaus in Baseless Fabric’s modern adaptation and James taught them to sing and act out part of a duet from Die Fledermaus themselves. After performing it as a group some brave students volunteered to sing solos, duets or in trios at the end! 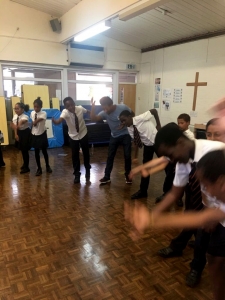 What did the students enjoy most in the workshops?

We got lots of brilliant responses from students at all the schools and there were several who were initially shy who really turned round. The children loved the warm up games, listening to the story of Die Fledermaus and hearing Danae sing. Stand out mentions go to Eardley Primary in Streatham where the students seemed to really love singing and learning how to make their voices better, while we were thrilled that at Swaffield Primary the students’ interest in opera was raised so high during the workshop that the teacher ran back in afterwards to tell us that some of the kids were now considering opera as a career!! 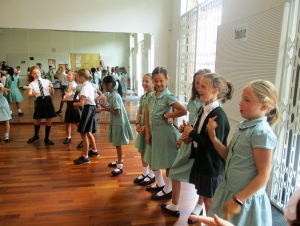 What was your favourite moment in the workshops?

“The times when students went from being reluctant to really engaged. It was great to see the ones that were initially shy step forward and try things!” (James)

“Student J appeared disengaged and a bit disruptive but then we added percussion and he was seen to be singing a tune on his way home!” (Danae)

“A year 5 boy did a solo, made a mistake and with encouragement happily tried again and performed brilliantly!” (Elliott)

You can also read about our workshop in the Swaffield School Newsletter at http://www.swaffield.wandsworth.sch.uk/docs/newsletters/Swaffield_Newsletter_10_last_one_of_the_year_Final_18_July_2018.pdf

And now we’re onto the busy planning of our longer term opera youth project with one secondary and one primary school in Merton and Wandsworth. It’s an exciting opportunity for two lucky schools and the extremely lucky group of students who get to be involved and we can’t wait to get started! More details on that later over the course of the Die Fledermaus project!!

We are delighted to welcome Rachel Kraftman to ...