Probably not one for the opera purists! 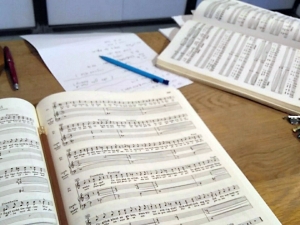 Ok, first things first – ‘libretto’ is just the opera name for the words that the characters sing. I’d not written one before and now, for our upcoming production of Cosi Fan Tutte, I’ve tried my hand at this for the first time. It was quite hard! But really fun and exhilarating at the same time. And having worked as Assistant Director on Opera North’s production a few years ago, I knew this story inside out and so had very clear ideas about what I wanted to cut to make a shorter version (which bits of music though lovely don’t move the plot forward etc) and how I wanted to re-imagine this story for the modern world around us.

We always knew that this would not be a traditional production in C18th costume (which would kind of look out of place in Starbucks!) but that the characters would be in modern clothes, wearing what you or I might wear on the high street, at work or in the pub today. And so the way our characters speak should be similar to how we’d speak on the high street today and the story of their lives should have similarities to friends and couples in the pub or the supermarket today. Except that rather than speaking, our characters just happen to be singing opera (accompanied by violin, accordion and bassoon all standing close by)…

Now Cosi Fan Tutte was originally written in 1790. Mozart wrote the music and Da Ponte wrote the libretto. Some things have changed quite a lot since 1790 – especially views towards women. The original Cosi Fan Tutte has elements that are seen as misogynistic from a modern viewpoint and as a feminist I’m not exactly interested in that! But some things haven’t changed since 1790 – love, friendship, feeling confused about how you feel about someone, changing how you feel about someone, being overwhelmed with attraction for someone, not being able to believe someone could betray you… And that’s a story that feels relevant to who we are now and a story I’m excited about telling.

So as I’ve rewritten the words of this story, I’ve not translated accurately from the original Italian to English at all. I’ve read several different English translations, written what I think the story is and what the characters are going through at any given moment and what that situation would be like in a modern context. And then I’ve spent an awful lot of time listening to the music, trying out different words to fit the rhythm of the line and trying to get the words I want to fit. It’s involved a lot of banging on the table tapping out the rhythm. I think my neighbour thinks I’m a little mad! It means some lines are similar in meaning to the original Italian and some are very different indeed but I believe are what the characters would say in that situation today. But, for example, “I am feeling just a little bit hungry. I think I’ll buy some crisps” isn’t exactly a well known Mozart line. 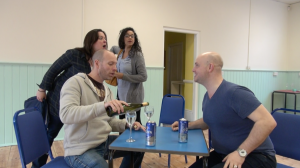 If you’re an opera purist, this probably isn’t for you I’m afraid. I mean, we have cut it down to an hour for one thing so there’s probably a lot of your favourite tunes missing! It’s definitely a modern, high street re-imagining of the Cosi story. But if you’re an opera newbie, love opera but are interested in making old stories feel alive and real and relevant today, or excited about seeing opera in unexpected places (and/or seeing the looks on other people’s faces as they realise the person next to them in the fruit aisle of the supermarket is singing opera!), then why not come and see what we’re up to? I’d love to know what you think about opera and whether this “love story with a bit of meanness” as one student described it during one of our Cosi young people’s workshops, is a story that makes sense on the high street and feels relevant to your world. And I really do hope you enjoy it!