It’s been a thoroughly enjoyable experience, not just because we’ve facilitated these young people in creating their own performance, but we’ve also witnessed their confidence grow and creative ideas flourish.

Students from Cranmer Improvising a Scene from Die Fledermaus

What can an audience expect at the end of the process? How is it connected to Strauss’ opera Die Fledermaus?

We have been particularly keen to focus on many of the themes of the original Die Fledermaus. We’ve been looking in greater depth at the piece through improvisation, scripting and music writing, and thinking about the ways in which we can creatively present aspects of the production to an audience.

Many modern references from Die Fledermaus have arisen from our sessions and as such have helped to inform the overall production. After we’ve scripted it in greater depth, we hope that the audience will experience a high energy and relevant performance drawing on the ideas of the young people.

What have the students learned and what have you learned from them?

Ha! I think that we have learnt a fair bit from these young people and they have most certainly influenced the final production!

From us, they have learnt key skills in performing in front of an audience, creative ways of presenting character and scene, and understanding the importance of working together as a theatre company to achieve success.

Aside from learning to ‘floss’, I think that we have learnt that the most vital part of working with young people in creating performance is listening to and drawing upon their ideas and suggestions. That has certainly added spark to the overall performance. 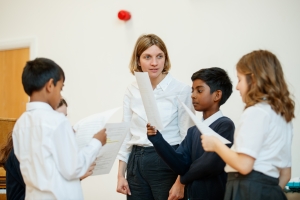 What has been your favourite moment so far?

Oh, there are plenty! I have really enjoyed creating our own song together through writing lyrics, and the enjoyment the students had in seeing their song come to life through music.

Alongside this I have enjoyed watching all of the young people build in confidence and building a performance together. It’s great to see it beginning to fall into place and I can’t wait for the rehearsal week.

Elen and James will continue working with the students from Cranmer Primary until July, when they’ll spend an intensive week working on the production, before performing it in August.