We asked Francis, originally a musicals fan, to tell us why we converted him to opera.

I am a musical theatre geek. I’m a self-confessed Renthead and up until a few years ago I hated opera…. But I didn’t realise I was watching the wrong opera productions. Here are 5 reasons why I think, if you love musicals, you should try Baseless Fabric’s free Die Fledermaus:

It’s in modern English and you can hear the words

I thought opera was always in another language or if it was in English you couldn’t really hear the words clearly, sometimes you have to be looking and reading the text from a screen?! – but that doesn’t have to be the case. In the Baseless Fabric’s opera productions the words are clear and you can easily follow the story of what’s going on. In fact Die Fledermaus actually has both spoken scenes and songs so it’s even more like a musical.

The story is about real people in real situations

I thought opera plots were all either really serious or really silly and illogical. But Baseless Fabric re-imagine the plots so that the stories take place in London life here and now. Yes there is lots of silliness in Die Fledermaus but as part of a story happening now. It’s both a lot more believable than Little Shop of Horrors and far less serious than Les Mis.

Guest what? Not all operas have someone dying at the end! Die Fledermaus may not be Book of Mormon humour (but then it is intended for all ages so that’s probably a good thing!) Baseless Fabric’s modern English text is funny, the superhero theme is fun, and there are a few social media references kicking about too…

One of the great things about musicals are the catchy numbers and this is the same in opera, although they do like to repeat them a lot in opera! You often catch me trying to sing to 525,600 Minutes from RENT in the shower!

At the end of it all, opera is basically the same as a musical – telling a great story through great music. And RENT is based on La Boheme and Miss Saigon is based on Madame Butterfly operas. The main overall difference between the art forms is that opera singers tend not to use microphones and musical theatre singers do. Yes then there’s differences in acting style, singing style, choreography/dance numbers, humour, number of musicians in the band etc – but that’s all just down to the individual production, not a difference in the actual art form.

So, if you love musicals, why not give opera a try with our Die Fledermaus production? And on the high street, it’s completely Free! 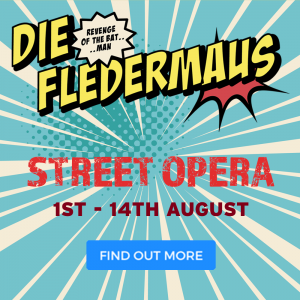