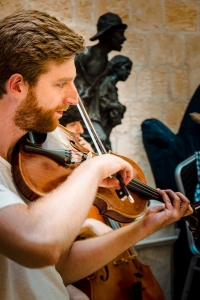 Originally from Northamptonshire and based in Manchester, Henry Rankin is a violinist, violist and multi-instrumentalist. He has wealth of experience playing with a whole host of different acts across a diverse range of genres. In 2014 he graduated from the University of Manchester, having studied violin with Julia Hanson, and completed a MMus at the Royal Northern College of Music studying violin and viola with Susie Mészáros (with generous support from the Edna Newill Charitable Trust) in 2017. Since graduating, he has straddled the classical and pop worlds performing with orchestras such as the Manchester Camerata, Skipton Camerata and Kaleidoscope Orchestra and with bands such as Public Service Broadcasting as well as playing ‘Mrs Scraper’ in Constella OperaBallet’s production ‘Sideshows’. In Autumn 2017 he concluded a sixteen-date UK/European arena tour with singer/songwriter Sophie Morgan in support of folk rock icons The Waterboys and most recently a run of showcases at SXSW festival (Austin, Texas) with artist Chloe Foy. As a session musician and arranger he has performing credits on several pop releases, one of which reached number nine in the UK album charts.