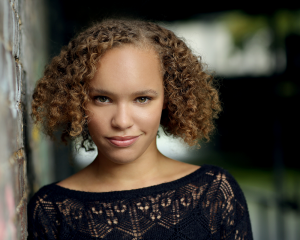 Phoebe McIntosh is a London-based actress. Since graduating from the MA Acting course at London’s Arts Educational, Phoebe has gained many diverse and exciting credits.
Her first short, Still Born, was nominated for Best Film at the Black Filmmakers International Festival 2009 when it was screened at the BFI. She has gone on to star in the debut music video for acclaimed artist Emeli Sandé’s single, Heaven, directed by Jake Nava (Beyoncé -Single Ladies) as well as a slate of varied and well-received short films ranging from sci-fi to comedy.
In 2012, she worked under Creative Director, Danny Boyle, as a member of the ensemble cast of the London 2012 Olympic Opening Ceremony, where she performed in front of a live audience of 80,000.
This year sees the release of her debut feature film, The Long Road, in which she plays lead female love interest, Rosie.
Phoebe is also a writer and in 2013 she penned, produced and performed in a sell-out run of her first play, The Tea Diaries, at the Edinburgh Fringe Festival before it made its London fringe debut at The Tea House Theatre, Vauxhall.
As a voiceover artist she narrates audiobooks, corporate films and video games.
Phoebe is represented by Michael Keane at Elaine Murphy Associates. END_OF_DOCUMENT_TOKEN_TO_BE_REPLACED