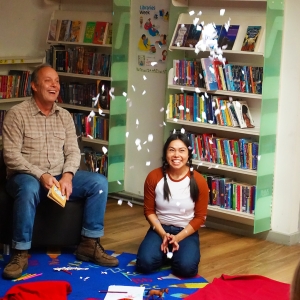 Baseless Fabric presents David Mamet’s short early plays Reunion and Dark Pony as site-specific performances in libraries across South London as part of National Libraries Week. Both plays are about father and daughter relationships. Reunion tells a story about an ex-alcoholic father, reconciling with his daughter for the first time in 20 years. In Dark Pony a father tells his child a magical fairy tale about the friendship between an Indian Brave and his Dark Pony.

Starring David Schaal whose TV credits include The Inbetweeners & The Office.

We explored these early plays by one of America’s leading contemporary playwrights that are rarely seen in the UK by immersing the audience in the worlds of these plays in unique and atmospheric library environments. 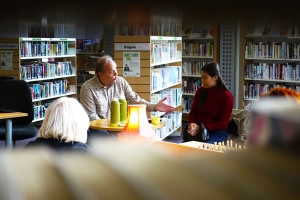 This rarely performed double bill is both an ideal introduction to theatre for new audiences, and a treat for seasoned theatregoers.- Everything Theatre
This was a most enjoyable production perfect for its location.- LondonTheatre1
The company couldn’t have chosen a more suitable author for this purpose than the one who once said “My alma mater is the Chicago Public Library. I got what little educational foundation I got in the third-floor reading room, under the tutelage of a Coca-Cola sign”- Everything Theatre
This is a rare opportunity to see two early works from David Mamet in a very special venue… this Libraries Week it’s lovely to see [libraries] getting the appreciation they deserve.- Theatre Things
Dark Pony is a lovely testament to the power of stories (and particularly appropriate in the library setting), but it also serves as a perfect counterpoint to Reunion by offering a glimpse of what Bernie and Carol missed out on.- Theatre Things
“Celebrate Libraries Week (9 – 14 October) with sombre, but touching father/daughter dynamics”- The View from the Upper Circle
“David Schaal as Bernie and the book-reading father captures the right kind of wide-eyed intensity, reeling from his hard life and the mistakes he’s made, desperate for a fresh start. And you can almost hear Siu-see Hung’s (Carol and the young daughter) internal struggle, as she tries to find the words to put her life into focus.”- The View from the Upper Circle
Both plays “lend themselves well to the space between the bookshelves”- The View from the Upper Circle