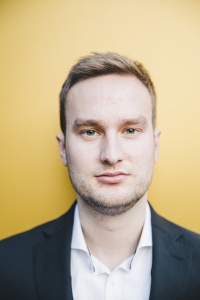 Alexander Gebhard is a young, versatile British-German tenor, who is starting to make a name for himself as an original performer in concert, song, and opera. His broad repertoire ranges from baroque masterpieces, via classical and romantic repertoire to compositions of the 20th and 21st centuries. He began his musical education at the Conservatory of Luxembourg in the ‘Pueri Cantores’ Boys Choir and in the studio of Marie-Reine Nimax-Weirig. He is currently studying on the masters programme at the Royal Academy of Music in London with Prof. Raymond Connell.

His concert engagements throughout 2018/19 include Bach’s Matthew Passion with Trevor Pinnock, BWV 106 Actus Tragicus with Philippe Herreweghe, BWV 80 with John Butt, Bruckner’s Te Deum in the Luxembourg Philharmonie, Bach’s Christmas Oratorio with the Kilgour Consort and Haydn’s Paukenmesse with the Chamber Orchestra of Luxembourg.

In 2018/19, his operatic engagements continue to reflect the breadth of his repertoire. As such, he will perform Tamino/The Magic Flute with Ensemble OrQuesta and the Hastings Philharmonic, Belmonte/Abduction from the Seraglio for RAM Opera Scenes, Don Carlos/Les Indes galantes for Ensemble OrQuesta, Cecco/ Il mondo della luna for New Chamber Opera and Brother/The Hogboon (P. Maxwell Davies) with Karina Canellakis at the Luxembourg Philharmonie.

His studies are supported by scholarships from the Royal Academy, the Rotary International Foundation, the Luxembourg National Cultural Fund, the Mrs S S Payne Award, and the Mario Lanza Educational Foundation and he is an Academy Bach Scholar, supported by the RAM/Kohn Foundation. He holds an MPhil from the University of Oxford and a BA from the University of Cambridge, where he was a Junior, Senior, and Choral Scholar at Trinity College. For more details and upcoming performances, please see: alexandergebhard.com